A recently published study is giving yet more support to arnica.  This study can be found in its entirety here. Arnica montana is used in Anthroposophic medicine for many issues- the most common use is for wound healing including as a boost for post surgical healing. The feedback I receive from patients after using arnica has been very positive. Combudoron is a combination of arnica and stinging nettle that has proved itself as a wonderful burn remedy. It often surprises me how well burns heal and do not scar after use of Combudoron. It has proved itself innumerable times in sunburn. 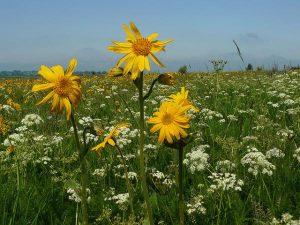 From an Anthroposophic perspective arnica supports the I and the astral body. Steiner described it as calling the higher self to support the astral body. Arnica montana grows in a habitat of high elevation, well drained poor soil and is a perennial. Arnica relates to the silica forces and this is demonstrated by the fact it is very hairy. Hair is a sign of the silica processes which encompass cosmic forces- this is shown especially strong in the lanugo hair of the fetus and newborn. Arnica contains strong essential oils and further shows its relationship to warmth by resisting the cold harsh conditions it thrives in. High elevation further emphasizes the link to the astral in this healing plant.  We are blessed with a living combination of support for these higher members of the human being balanced in one plant.

In the study multiple potencies of arnica were tested on cell cultures. The researchers were able to show consistent up regulation and down regulation of certain genes in these cells that was significantly higher than controls. The 7 up regulated genes included low-density lipoprotein-receptor-related protein1 (LRP1), fibronectin1 (FN1), lysine(K)-specific methyltransferase (KMT2D), complement component receptor1 (CR1), heparan
sulfate proteoglycan (perlecan,HSPG2),microtubule-actin crosslinking factor1(MACF1), and fibrillin2 (FBN2). Most of these genes have a direct action in the healing of wounds. For instance fibronectin forms an essential part of the extracellular matrix and is noted to be important especially in tendon healing.

The researchers also performed something called a “scratch test”. A plate of cells was scratched with a needle and the time it took for new cells to migrate in and repopulate the scratched area was compared. Arnica treated cells were found to have a faster recovery from the scratch test.

Of note the findings were noted with potentized (homeopathic) arnica as well as less dilute arnica and all forms had a significant effect on both the genes and the scratch test.