Inspiration for the Martin Clinic

Inspiration for the Martin Clinic

by Mark Hancock MD MPHNovember 15, 2016April 26, 2018 Leave a Comment on Inspiration for the Martin Clinic

The Martin Clinic takes its inspiration from Saint Martin of Tours, a 4th century figure who as a teenager converted to Christianity. Most notable of his many deeds took place on a blustery cold winter in France, where Martin was on duty as a Roman soldier. He encountered a near naked beggar. Martin removed his cloak and drew his military sword, cut his own cloak and shared it with the beggar. That night Martin dreamed that the beggar was Christ. After this his life was full of magnificent saintly deeds. 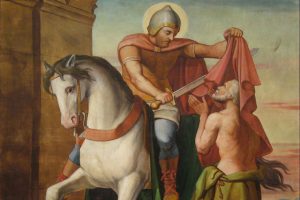 The name “Martin” means “the one dedicated to Mars” and Martin both embodied and transformed the warrior impulse into a saintly and healing one. A mercurial process took place steeped in love. True healing takes place when processes that are too weak in one area are balanced with processes too strong in another. This is why Mercury has traditionally stood for healers, merchants, and thieves. Merchants take resources overly plentiful in one area into other areas where they are scarce. Thieves (think of Robin Hood) also “take from the rich and give to the poor”. Because our missions actually closely overlap, The Martin Clinic is aligned with the Alliance for Economic Renewal which is working to create a new currency that will support social and cultural work.

St. Martin, St. Martin,
St. Martin rode through wind and snow.
His horse so fast with him did go.
St. Martin rode through weather rude, his cloak around him warm and good.
In snow there sat a beggar near
with cold his eyes so full with tears.
“Please help me Martin in my need or I shall die – my word to heed”
St. Martin’s eyes filled up with pain.
He pulled upon the horse’s rein.
St. Martin took his sword so true and cut his mantle right in two.
St. Martin gave one half away.
The beggar tried some thanks to say.
St. Martin rides away so fast, with half a cloak against the frost.

Next
Laetrile for Cancer